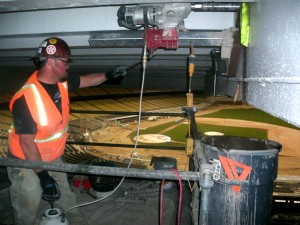 Coring 1 of 88 2 inch holes through a beam. Home plate seen in the background.

Subsurface Imaging, Inc. was hired by Morrow Meadows Corporation to inspect nearly 100 areas that would later be core drilled. Morrow Meadows owns and operates their own core drilling truck and operator. However and as one can imagine, Morrow Meadow core rig operator is incredibly busy. When the Morrow Meadows Foreman for this project heard that Subsurface Imaging now offers coring as a service, he jumped at the opportunity to have us both inspect and core drill each location. He immediately saw the benefits of one company performing both services; time savings equals money saving.

Because other trades were working in this area, we could not start work until they moved out, which was on a Wednesday. However, we had to be completely finished by that Sunday. Normally, this would have been a one, maybe a two man operation. This particular job required three people. We were working directly above the stadium seating on a rolling scaffold. We needed to push this scaffold to each location, navigating the four legs through the aisles of the seats, 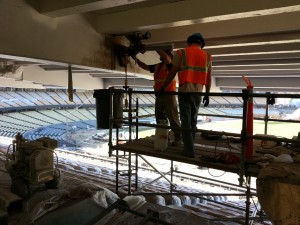 Setting up the drilling rig above the stadium seats.

not an easy task. Once the scaffold was locked into place, we needed to climb back up to the platform, set the drilling rig and core the 2” x 16” hole. This needed to be done 88 times as we traversed around the entire stadium. 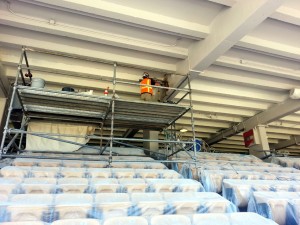 Standing on a scaffold above the seats.

Not all beams are created equal – As we soon discovered, while the beams looked the same on the outside, they were not created equally on the inside. Our client needed to re-adjust where the holes would be drilled roughly one third of the way into the coring operation. Normally, this would have meant stopping the coring company, making a call to the inspection company, praying there’s an availability and waiting for them to arrive. Not so if you’re both a coring company AND an inspection company all wrapped into one. We simply brought out our radar unit and checked alternate areas. This saved our client time and money once again. Instead of calling the inspection company back out to recheck areas, the “coring company” simply switched hats and transformed into the “inspection company”. We happily completed both the radar and core drilling operations on Saturday, one full day ahead of schedule. Needless to say, another happy customer.